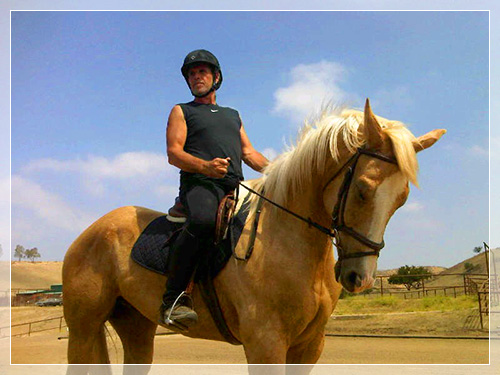 Throughout his life, Amos Stockfish has dedicated himself to the pursuit of true happiness. Evolving himself and his company countless times while staying devoted not only to mastering both his professional and personal artwork, but to Grudjeff philosophies, parenting his 5 kids, and strengthening his deep love for what he calls the glue to the many pieces of his soul: Horseback riding

But to define a person is difficult and as his mother once said, “To know Amos is to enter the mind of a cultured imagination and soulful spirit.”

Born to holocaust survivors and raised near Tel Aviv, Israel, Amos spent many of his childhood days in a library near his home, feeding his mind with curious images.

Outside of the library Amos was cultivating a deep appreciation for life. Always with one of 17 dogs by his side, Amos immersed himself in the world of music, becoming a vegetarian before the term was even understood in Israel and found resonance and identity with political movements of peace and love.

This is where his life long love affair with art began and continued eventually leading him to the Tel Aviv Art Academy in 1981, at the age of 28. There he refined his skill for producing beautiful Paintings, Sculptures, Carvings and more.

Before, after, and in-between, his deep fascination carried him away from the dreamed world in his books to an extended soul search around the world, having visited over 27 countries and every continent at least once in his life time. In ‘84 he married, with a honeymoon resulting in a 1-year stint in India where his first daughter was born and the soul of an artist, nourished. Soon after he moved to the United States where he found work as a sculptor and a carver as well as a sincere new-found devotion to horseback riding. His instinctual touch for wood and design spawned his first company, Amos Art Studio specializing in high-end custom furniture. With patience and dedication the company grew by name and status and evolved into what is now known as the highly revered Emanuel Morez Inc.

Although his furniture may classify as traditional it’s transitional style rises above classification and labels. The deep quality of his soul radiates through his pieces, bringing warmness to any setting. As an artist, Amos’ work is sometimes defined as a “lyrical abstract” yet he truly believes in an eclectic approach and eclectic look, making everything he does unique and special. In the last six years Amos has returned to his core with an inventive and exciting new lighting line, modern line, and most recent platinum line, once again opening an avenue to his creative and imaginative qualities.

Currently he is residing in Southern California, designing and creating the pieces of his dreams, laying by his pool, surrounded by family, painting and riding his beloved horse, dreaming and laughing all the way.

Instant updates, new designs, and EM specials! Be the first to find out, sign up today!